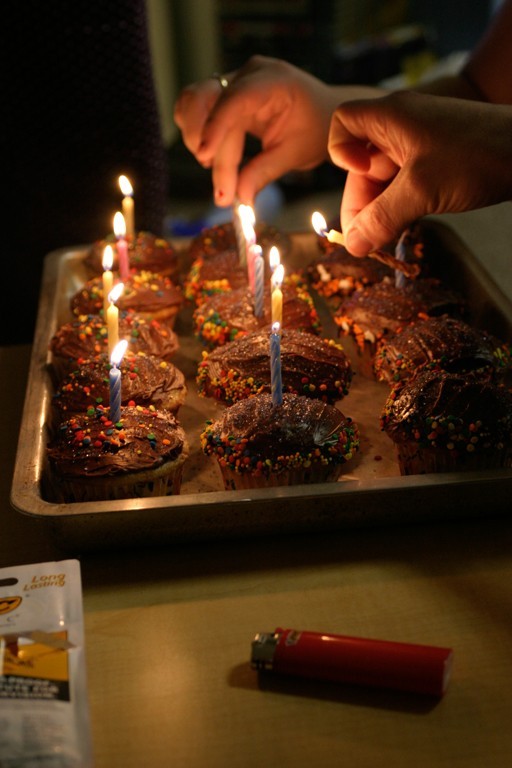 Posted by Jimmy (Pittsburgh, United States) on 19 January 2008 in Lifestyle & Culture and Portfolio.

it has been said: "Show me a man who doesn't love cupcakes, and I will show you a man who has no soul."
Okay, that's probably never been said, but it probably should be.
Today's image is from a friend's birthday party. I like the warmth in it, both in the colors and the memory.
Entirely unedited, just resized in CS3.

(you can stop reading now if you want, I'm about to go off topic)

I just did something I hate. I hate when people brag about how they don't edit their images. Sorry folks, but the camera doesn't see the world like I do. It records, it doesn't interpret. If you are going to talk to me in a condescending tone about how you are a purist and infer that my image "needed help" out of the camera, then I will probably assume you just haven't learned how to edit a digital image yet. I appreciate the purist mentality, I really do, but explain why you dislike image editing. Don't just tell me "I don't touch any of my images man, they are right out of the camera without all that cheating."
Explain why you are a purist. I'll respect that.
Then I'll tell you to go learn Photoshop.
Not to condescend, mind you, just because I think you should at least try all the tools available to you before you knock them. Some pros edit their images very little because they know what they want and create it with proper lighting and other techniques. But even they understand that you have to correct for what the camera cannot properly interpret.
Anyway, I'm rambling, and I probably offended the purists without eloquently stating the idea I was trying to convey. Drop me a line if you'd like to discuss this. I'm always up for talking.
Unless I'm busy eating a cupcake.